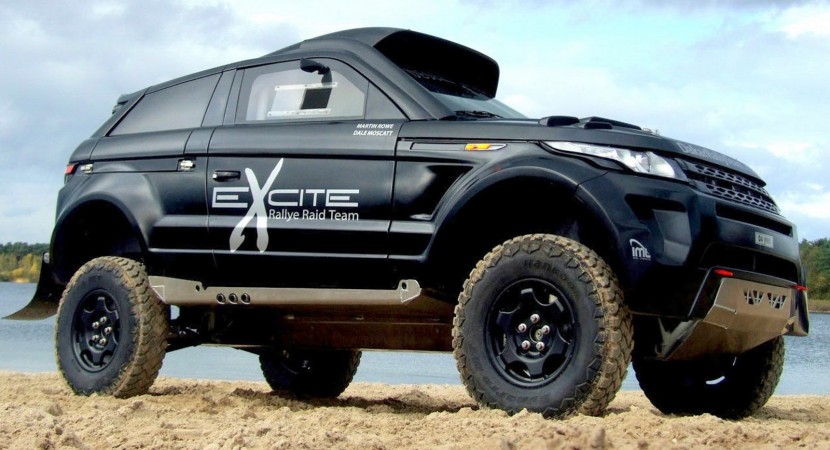 Land Rover’s plans for their baby luxury product, the Range Rover Evoque, are pretty sensible ones as far as they’ve been telling us.

What they planned with what they’ve built seems a little different. They were originally talking about going smaller and making a different powertrain, one that’s a plugin hybrid. What was built, is something called a Desert Warrior. That’s a badass rally car which is thogh as nails and very fast at off-road driving.

In truth, the only car that wasn’t built by Land Rover but by the Excite Rallye Raid Team but the stats and looks are justified when it comes to analyzing it a bit.

Since it had to be jacked up, properly toughened and fitted with some “get out of my way” gear, the image is nothing but menacing and scary. The spec sheet on this machine seems to be talking about the same sort of ideas. Remember the small four pots this thing used to be powered by? They’re in the bin.

Instead, the Desert Warrior is powered by a BMW sourced 3.0 liter turbocharged inline six cylinder diesel engine that develops 275 horsepower and 627 lb-ft of peak torque.

This engine can really put those tires to work in moving the car anyway but once the restrictors are taken off, the powerplant can go up to 350 horsepower. The engine is hooked up to a sequential transmission and almost all of its 4.189 pounds make up weight of bespoke built components.

In terms of driving range, the engine is capable of travelling 745 miles on a single tank, but that doesn’t mean efficiency is the most important thing here since the fuel tank can hold 68.8 gallons.