The SUV has arguably become the modern minivan, ubiquitous and in demand by families hauling kids and “stuff”. Many adults choose the SUV, too, as a way to carry groceries, camping gear, pets and a myriad of other large equipment and luggage. Audi has ridden this trend with its Q series, a full-sized luxury crossover SUV.

The Audi Q7 is the 2017 model of the Q-series. The first Audi SUV, the Q5, was unveiled in 2009. The Q3 was then released in 2011. The Audi Q7 shares its platform with the Volkswagen Touareg and Porsche Cayenne, meaning that many auto parts used in those models are also parts used by Audi’s Q7. One of the biggest revelations of the 2017 Detroit Auto Show was the Q8 – Audi’s concept SUV and the next in the Q-series.

About the Audi Q8

The Q8 is a robust and large SUV, but with a more elegant “car” look. Its exterior body parts are shaped reminiscent of the Audi Quattro and were designed by Marc Lichte. This concept SUV isn’t just a family hauler. The vehicle’s interior parts include a number of luxury features such as multiple touch screens and a heads-up display for the driver, not to mention top-notch materials for the upholstery and interior accents. It has two rows of seating which is a good size for a family of five.

The Q8 shown at the Detroit Auto Show is a gas-electric hybrid. Audi may offer a plug-in electric engine version, in addition to the hybrid model; or it may skip an all-electric version of the Q8 and focus on all-electric models already under development.

What Is Different About the Q8?

Audi’s concept SUV was unveiled in order to get the public’s impression about many of its luxury amenities. The automobile’s mechanics, though, show how Audi is trying to move past or at least distance themselves from the diesel emissions scandal. Remember, Volkswagen (Audi’s parent company), installed emissions software that allowed the vehicle to pass EPA emissions standards during car inspections but turned off those systems and/or regulators when the car was in “regular” operation. 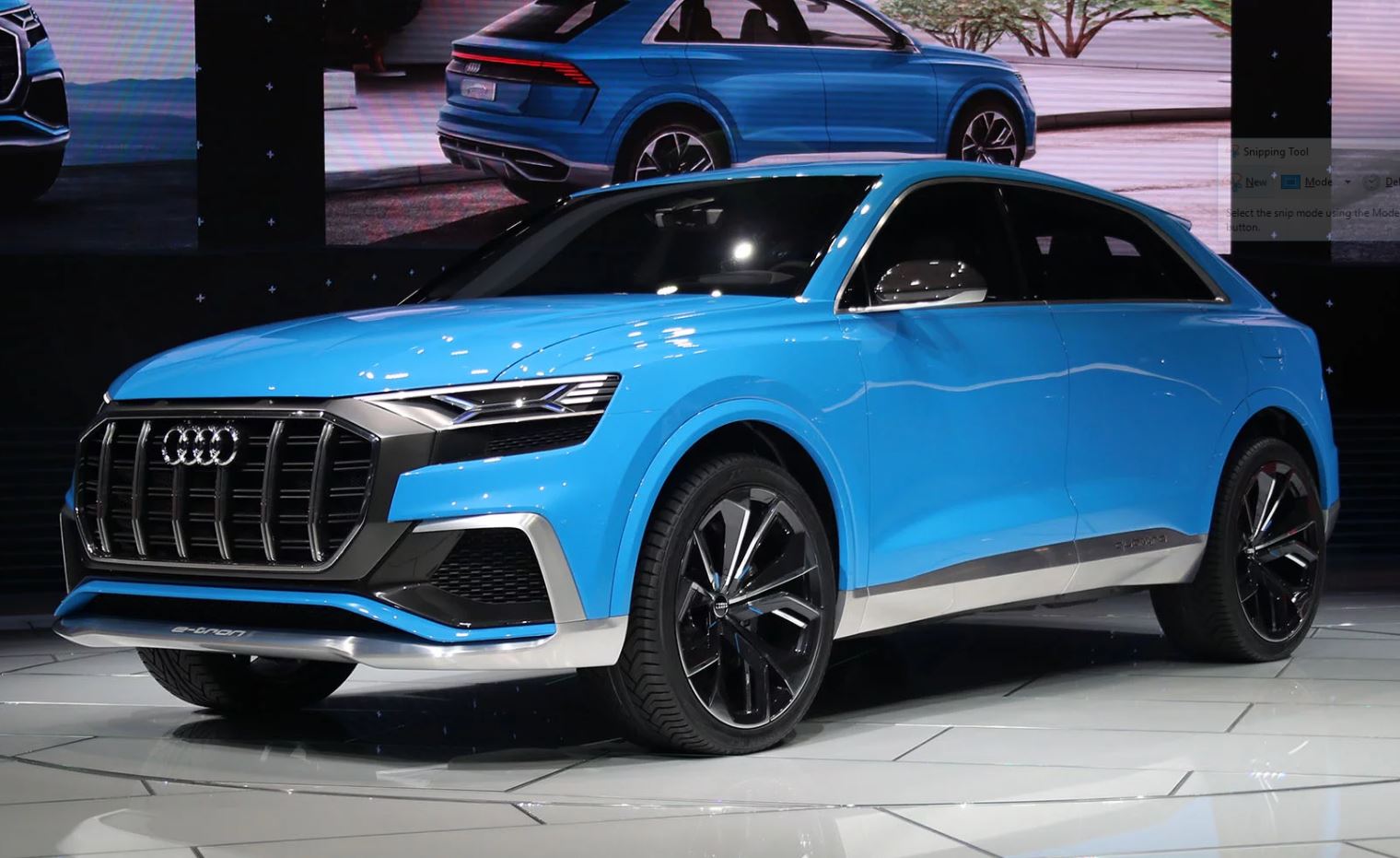 When drivers were on the road, the computer altered the fuel pressure, injection timing and exhaust gas recirculation. This improved the vehicle’s power and mileage, but also increased toxic nitrogen-oxide emissions.

The Q8 is designed to be so fuel-efficient and eco-friendly to the point that Volkswagen is seen as trying to atone for its prior environmental sins. The concept engine parts in this drivetrain include an efficient 3-liter turbo V6 engine with a 100 kilowatt electric motor. The concept SUV has a 17.9 kilowatt-hour lithium-ion battery pack that gives it an electric-only range of 35 to 40 miles. Interestingly, the Q8’s very efficient plug-in drivetrain will likely carry over to production even if the multiple touchscreens don’t, because the need to repair its image with the public is more important than boasting the most luxurious SUV.

The Q8 was not actually touted for being super eco-friendly; instead Audi praised its high quality SUV parts that will maximize the vehicle’s performance, power and speed. The Q8 is slated as giving people the power and luxury they’ve come to expect in an Audi, re-embodied as a hybrid automobile.

Will There Be an All Electric Q8?

As previously mentioned, the jury’s still out on the Q8 all-electric edition. Currently, an entirely separate all-electric model is slated for production in Brussels in 2018; that vehicle will be manufactured at the same plant where the Audi A1 subcompact car is currently made. Audi is tentatively calling it the e-tron quattro concept and the all-electric SUV will likely be named the Q6 e-tron. This all-electric vehicle is slated to compete with Tesla’s next generation of Model X electric automobiles.

The Q8 is a luxury, hybrid SUV equipped with Audi’s high-performance parts, and touted as recompense for VW’s prior diesel emissions deception. The concept car shown at the Detroit Auto Show probably has more Audi tech parts and features than the final production model will, but the gas-electric hybrid engine is likely to stay in the model going on sale in 2018. While it is still unclear whether Audi’s Q8 will have an electric-only version, Audi is known to already be working on a separate electric vehicle.