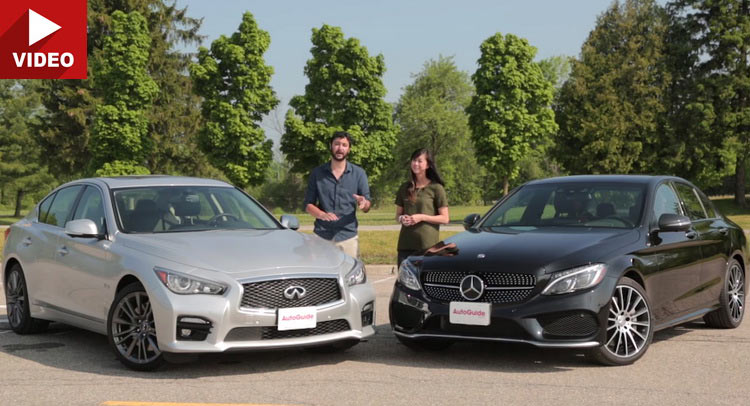 Taking a first look at the photo with the Infiniti Q50 Red Sport 400 sitting side-by-side the more aggressive Mercedes-Benz C450 AMG, one might think that there is something wrong with it.

Well, the odds might favor the C450 AMG, which tops its class, but the video below might change your perspective for good, as the Q50 seen here is featuring plenty updates.

We are not going to spoil all the fun, but we should clarify a few things before watching the video put together by AutoGuide.

From the start, we have to mention that the cars were not accidentally chosen for the comparison, as both of them come with rather the same prices, specs and similar performance under the hood, so it was a normal thing to see them side-by-side.

Second, both are equipped with an all-wheel drive system and seven-speed automatic gearbox, another reason to bring them even closer.

Now, as for the performance under the hood, things might favor the Infiniti, the South Korean car developing a good 400 horsepower and 474 Nm of torque. The C450 AMG outputs less, 367 horsepower, but favors the higher torque with 520. Interesting enough, both manage rather the same sprint from 0 to 100 km/h. Or…don’t they? Watch the video to find out more!