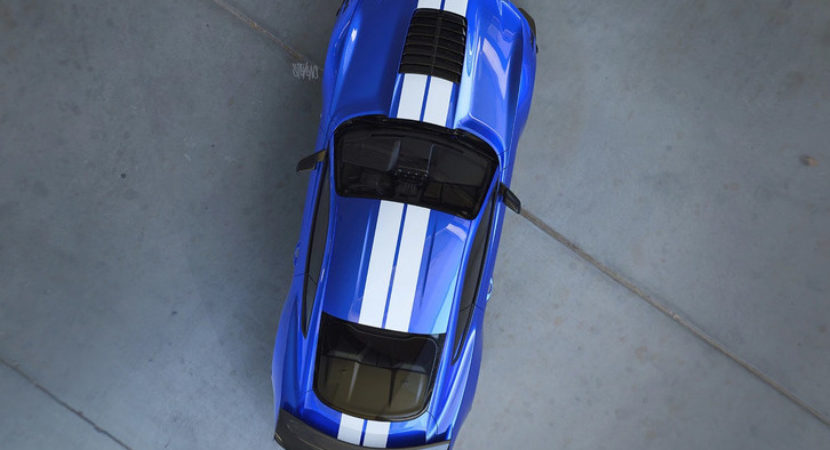 Following a recent spy video which showcased the upcoming 2019 Ford Mustang GT500 fast accelerating on the streets of Detroit, the North American based carmaker Ford has now released a teaser image of the muscle car`s body style viewed from atop.

The teaser image is also a clear sign that Ford has finished work on the new model and is now getting ready for an official release earlier than we expect.

As we can depict from the teaser image, the all-new 2019 Ford Mustang GT500 is going to be extremely muscular, featuring a unique bonnet with race heat-extraction vents, prominent centre section, while at the rear, a wide wing made from carbon fiber will provide increased downforce.

Just like we have already seen in the spy video some time ago, the car`s front end will sport an extremely aggressive front splitter, as well as blacked-out side mirrors and bolstered wheel arches. To complete the racing feel, the Ford has also thrown in some racing stripes running over the length of the GT500`s body style.

Performance wise, Ford has been tight-lipped about specifics, however, according to recent rumors, the 2019 Mustang GT500 is likely to sport an updated variant of the famous 5.2-liter ‘Voodoo’ V8, now equipped with a flat-plan crank. Still, there is no word of a twin turbocharger system or supercharger setup installed on the high-performance pot.

As for power and torque figures, the company has also teased it would exceed 700 horsepower, however, it didn’t say the exact output. What we do know is that the engine will use a standard manual transmission along with a ten-speed automatic transmission as optional.

We should be able to know more details about the gorgeous 2019 Ford Mustang GT500 in the upcoming period. Meanwhile, take a peek at the car`s muscular body style and imagine yourself how it will look in the final shape. We even expect some renderings of the model! Stay tuned!