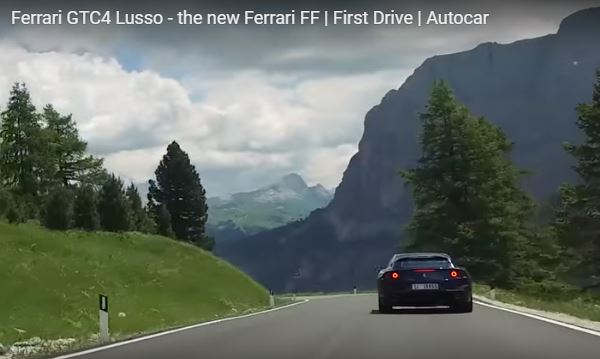 The Ferrari FF was and still remains an iconic supercar, but the Italian carmaker wanted more from the range and planned a replacement that would proudly carry on the legacy.

This is where the Ferrari GTC4Lusso sets it, the model getting ready for an official unveiling soon enough, and coming with an extremely appealing, yet aggressive body styling, exquisite interior and impressive performance under the hood.

Even if the video below says it all, I couldn’t help it and had to give the model a big round of applause. I really love the way it was built, with the round shape and cozy feel, especially inside, where the cabin greets you with the so called Dual-Cabin architecture design.

The Dual-Cabin architecture splits the dashboard into two parts, with the front passenger enjoying the new and visibly increased in size digital display in the middle, which now incorporates the latest infotainment system with tones of information.

As we can also depict in the video created by Autocar, the car`s engine intake sound is extremely aggressive and mind-blowing, announcing the presence of an extremely wild engine.

We are dealing here with a massive 6.3-liter V12, which now develops an impressive 680 horsepower and 514 lb-of torque, sending the power to all four axles. We are also dealing here with an updated and higher-performance four-wheel steering configuration which makes the model quite fast on the track or road.

With all the power available, the GTC4Lusso is capable of sprinting from 0 to 100 km/h in a whopping 3.4 seconds, at a topping of 335 km/h. Significant upgrades that make it that fast consist of the new Side Slip Control (SSC4), SCM-E suspension damping, SS4-based Torque Vectoring as well as the Magnari SCM-E damper control.

Meanwhile, take a look at the 6 minute video with the Ferrari GTC4Lusso having a good time on the road!