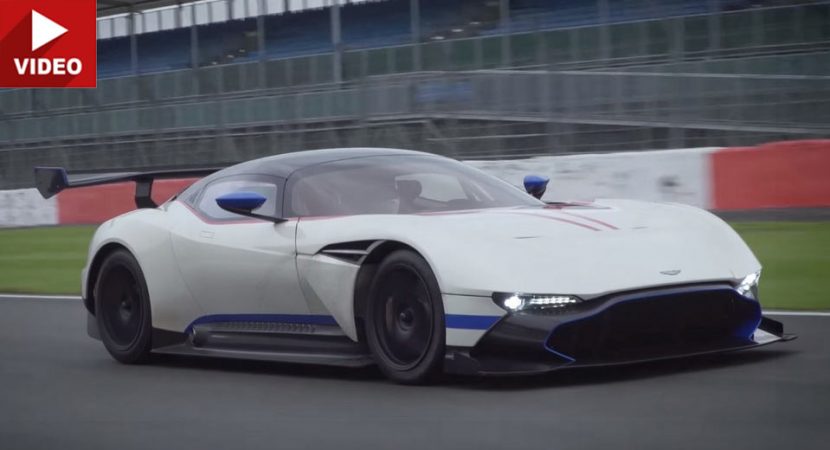 We are used to seeing the latest super hybrid monster cars playing around the track and setting record after record, just like McLaren P1 GTR did at the Goodwood Hill Climb or the Porsche 918 Spyder at the Ring. Now we get to see some live action around the Silverstone track with the Aston Martin Vulcan as the main star.

The video below was created by no other than Autocar magazine, showcasing the mind-blowing power of the Vulcan supercar; and remember that we are not dealing with the 918 Spyder hybrid car, we are talking pure and genuine power all squeezed from a “conventional” motor.

The petrol supercar is packing a mega-huge 7.0-liter V12 engine which develops 820 horsepower at 7,750 rpm and 575 lb-of torque, delivered at 6,500 rmp. The entire powertrain is hooked to a six-speed sequential transmission which helps the supercar reach 100 km/h in just 3.0 seconds. And that my dear friends, is a lesson for all other candidates out there.

Not only the massive engine helps the Vulcan reach such an astronomic power and performance, the supercar also shedding-off some kilos, now weighing just 1,350 kg, with the engine being mounted at the front.

Also, the supercar is also equipped with the Mach driving modes, with Mach 1 propelling the car to 550 horsepower in a splash, while the Mach 2 gives you a heart attack to an outrageous 675 horsepower. There is also the queen of spades, Mach 3, which makes the Vulcan behave like a real beast on the track.

The video below should give you a better understanding of the idea of a Vulcan, if not, just state your contrary in the comments section!