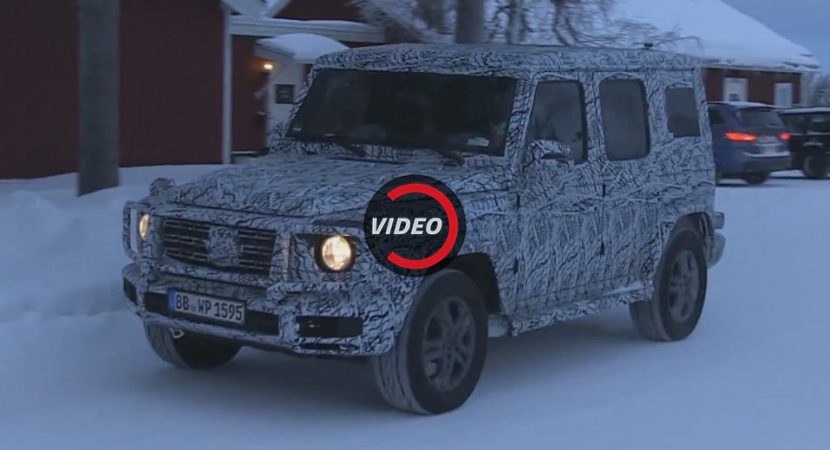 The German-based Mercedes-Benz carmaker stated in autumn last year that it plans to develop more and more versions with the direct involvement of its special AMG division, thus creating more exquisite models that would successfully cope with those from BMW, Audi or Porsche.

The carmaker`s latest creation at work is no other than the long-rumored AMG G63, which is going to become the top of the line version of the G lineup.

Set to arrive as a 2018 MY, the all-new Mercedes-AMG G63 was recently spotted while performing some snowy tests, the car`s body styling being also surrounded by heavy camouflage. The spy video below is showcasing the model in its full plenitude, especially in the engine department, which is announced to come with an extremely aggressive roar and impressive power boost.

Visually, the new 2018 Mercedes-AMG G63 will share its basic design lines with the present model, yet it would eventually come out with more aggressive parts at the front and rear end. All we have to do is wait for an official unveiling, perhaps at the 2017 Frankfurt Motor Show.

Besides the new styling cues, the new AMG G63 is reported to use the same 4.0-liter twin-turbo V8 engine, also seen on other top of the line AMG models, and it will perhaps develop more than 571 horsepower and 760 Nm of torque as it develops in the current state. According to recent rumors, it should come out with rather the same power output as the present S version, meaning 61- horsepower and 850 Nm of torque.

Until further details emerge, please feel free to watch the spy video with the 2018 AMG G63 while revving its powerful engine!