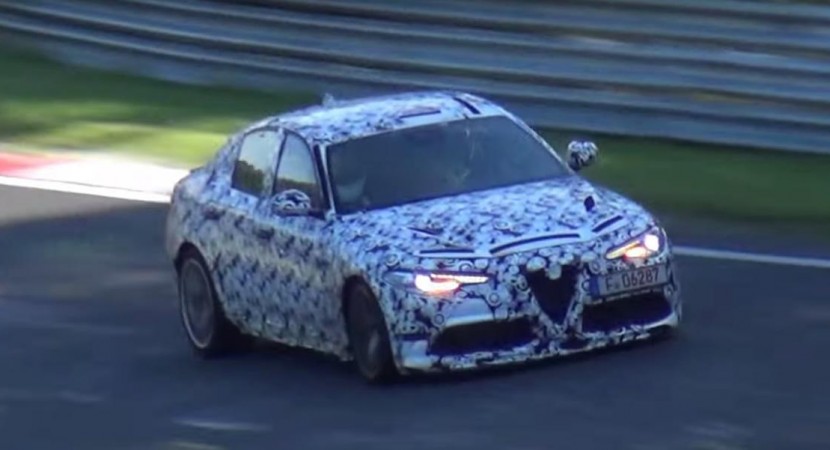 We have already seen what the top of the line Alfa Romeo Giulia Quadrifoglio can do, even from its humbling release a couple of months ago. And we already knew that the Italian carmaker hadn’t finished working on the model and sent it on the Ring for some rough testing.

The Italian based Alfa Romeo is preparing the entire Alfa Romeo Giulia lineup for the IAA, Frankfurt, but it seems that the top of the line Giulia QV is still having troubles when it comes to power. Even if powered enough to stand against the BMW M3 or Mercedes-AMG C63 S, the carmaker wants more.

And the spy video with some Alfa Romeo Giulia QV prototypes is showcasing the full tests carried out on the Ring, with the test mules running on full throttle and heavy braking.

It`s a go or no go for the Italian carmaker, which is trying hard to push this beast to the limits, hoping that the new tuning process would make it even more faster and much more powerful than the already launched model.

We have seen the Alfa Romeo Giulia QV on the tracks, going up against its top predator, the BMW M3 Sedan, and demonstrating that it can be faster than the German star. After all, in this form, the Giulia QV is packing a 2.9-liter V6 twin-turbo V6 engine, with 510 horsepower, which is enough to sprint from 0 to 100 km/h in just 3.9 seconds.

We will wait and see the final results with the entire Giulia lineup, especially with the top of the line Giulia QV next month, when it is set to arrive at the IAA, in Frankfurt! Until then, enjoy the spy video with the hot Giulia QV on the Ring!