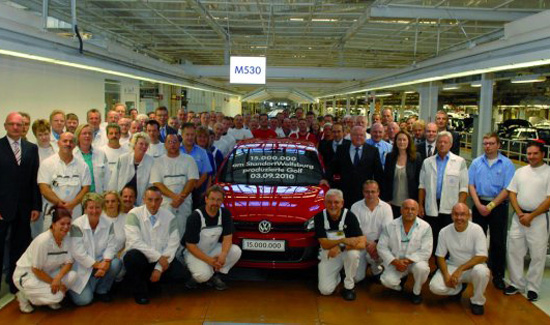 Volkswagen proudly announced that the Wolfsburg plant in Germany manufactured 15 million Golf units while the total units manufactured by the German manufacturer exceeded 27 million units. The model with 15.000.000 number was a special Golf GTI model in order to celebrate the record and was painted in Tornado red. The German model managed to be sold in more than 27 million copies during 36 years and six generations.

Few years ago Volkswagen also released a commercial celebrating the 25th million Volkswagen Golf copies sold around the world. The video shows us the Golf model in several big countries such as London, Shanghai or Sydney, where the German model became more and more popular over the years.

The 15 million record was set on September 3 and the event was celebrated by the Germans at Volkswagen as you can see in the post’s photo. Here is the video we talked earlier, celebrating the 25th million Golf units sold worldwide by Volkswagen: