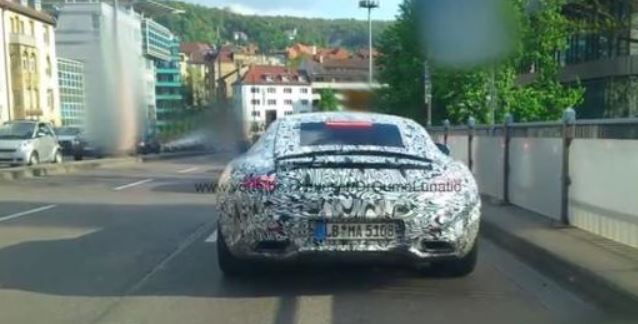 The fresh not yet unveiled Mercedes-Benz AMG GT has been caught on video in Stuttgart, Germany, while being parked or riding on the German roads.

The Mercedes-Benz AMG GT has already been previewed some time ago, and now, a clip shows the car in some driving tests, which is a clear indication that the super luxury car is coming soon.

The clip shows the car in a collage of pictures, with the AMG GT model that will actually replace the SLS AMG, being rather an average supercar, and not the next in kin.

The Mercedes-Benz AMG GT would be coming with a version lineup, which would be a standard one, a lower-spec version, as well as a top of the line model.

The Mercedes-Benz AMG GT is rumored to sport a 4.0-liter twin turbo V8 unit under the hood, developing a great 520 horsepower (387 kW).

The lower-spec version of the super car that will produce 480 horsepower (358 kW), for the same unit set up.

The Mercedes-Benz AMG GT is due to arrive in October, at the 2014 Paris Motor Show.