Home
Comparison
The Battle of the Midsize Trucks 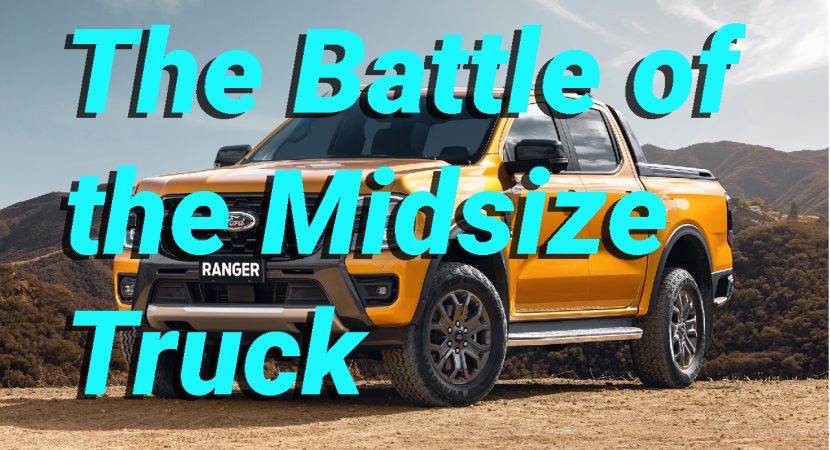 When it comes to midsize trucks, the rivalries don’t necessarily earn shoppers many extras for the money. It definitely pays to know what you should get for your dollar before you spend it.

In this category, the most affordable contestants are the Chevrolet Colorado and the Ford Ranger.  However, the Ford Ranger pulls ahead because the price buys you a turbo-four, 270-horsepower engine that is far more capable than the Colorado’s standard four-cylinder.  Paying the same or less, the Ranger driver will have drivability, payload and tow ratings sewn up.  If you are looking at used trucks, keep in mind that this engine wasn’t standard before 2019.

Claiming cool, quite literally, the Jeep Gladiator offers an open-air ride like the Wrangler. The truck’s throwback look is exciting to some while others may dismiss it as working too hard.  Jeep’s rivals have been learning from the brand and have been trying to amp up their own cool factor. Ford has a Splash package that adds lots of color and style to the Ranger’s exterior.

Jeep trucks always have four-wheel drivetrains, allowing all of them to do slightly more than their rivals at the entry-level.  As for the Gladiator Rubicon’s ability, it has some definite competition in the Ranger Tremor, Nissan Pro-4X,  Canyon AT4, and Colorado ZR2.  The Ford Terrain Management System, a standard on 4×4 models, is as good a tool as the Jeep’s similar system.

You will see that the Gladiator, GMC Canyon, and Chevy Colorado have slightly higher tow ratings than the Ranger. However, the buyer pays a huge premium for that diesel engine and only gains another 150/200 pounds of towing capacity.  That $5,000 to $15,000 difference can net you the Ranger with its 7,500-pound tow package at just above the entry-level price. Ford’s blind spot monitor is the only one that can extend its view to include the trailer.

It may seem like the Ranger is getting all the prizes, but that’s just by the numbers. For the money, the standard turbo-four engine with class-leading 310 lb-ft of torque is always going to be more lively than the Colorado or Canyon’s four-cylinder unit. Plus the Ranger engine is extremely competitive with the higher-priced engines on all of its rivals.  Then there’s the matter of Ford’s ten-speed automatic transmission.

Once again, the Ranger leads the category. Ford offers the entire Ford CoPilot360 package on the XL and makes it standard on the XLT.  While these types of systems are standard on the Honda Ridgeline, it costs more than the XLT, leaving Ford in the first place. The Gladiator and new Nissan Frontier are offering most of these crash avoidance features.  However, GMC and Chevrolet trucks do not have modern crash avoidance systems except on the highest trims, and they lack the full package even at that level.

The new Ford Maverick is a compact truck that earns up to 40 miles per gallon thanks to its hybrid drivetrain.  Behind that, the Canyon and Chevrolet offer a diesel with better overall highway fuel economy (30 mpg) than any gas-powered midsize trucks.  Yet, the Ford Ranger entry-level truck earns 21 MPG city while the GM diesel earns only 20 MPG city.  Furthermore, the Ford leads the gas-powered midsize class with 26 miles per gallon on the highway. Furthermore, it only needs regular gas unlike the GM trucks which need much pricier diesel.

All in all, the midsize contest currently comes down to the Jeep Gladiator versus the Ford Ranger. However, the Ford offers to save about $9,000 at the entry-level mark, has better horsepower and torque, and promises lower fuel costs while managing to meet most of Jeep’s off-roading challenges. At this point in the midsize truck contest, it would seem that Ford was winning.