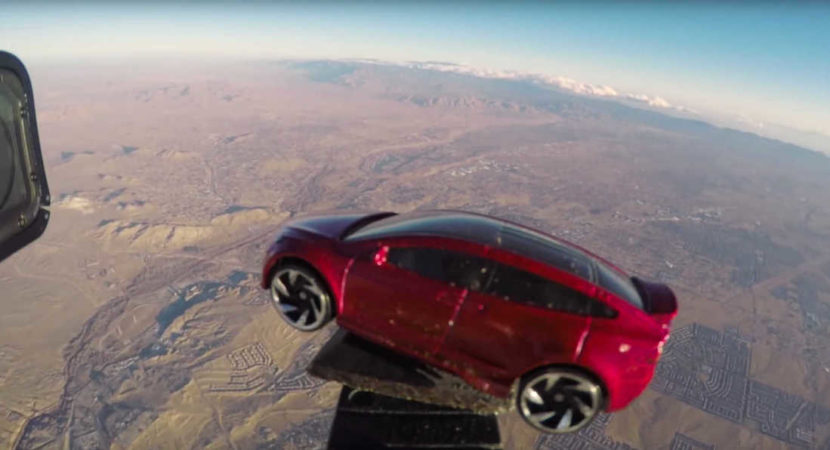 When rumors surfaced regarding the launch of a Tesla Roadster into space, most people were intrigued by the idea. Not only does it seem useless to send a vehicle into space, but the amount of energy wasted for no good reason is also substantial. A group of people on the internet have decided to create a parody of this particular event by throwing a toy Tesla Model X from a hot air balloon. The parody seems to have caught the eye of quite a number of viewers.

The YouTube account where the footage of the toy vehicle being launched was posted is known for posting such materials. It seems to be specialized in the distribution of such materials that seem to be parodies of different events in the automotive culture. While these parodies may not necessarily be of use to anyone, they sure bring to light a fun side of the automotive industry. It is also a refreshing new look at the otherwise serious side of this industry. Such YouTube account like this particular one, called Donut Media, are at the core of the automotive industry.

Even though the people over at Donut Media didn’t manage to replicate the space launch as it happened, their take on the event is original. It is this originality that won most people over and guaranteed the success of this particular video. After all, watching a toy car being launched into thin air is quite entertaining. In this particular case, strapping a camera to the toy car turned the video into something even more interesting. The end result in this case was the loss of the toy Tesla Model X. interesting enough, the guys over at Donut Media decided to post the coordinates where they believe the toy could be located.

According to Donut Media another toy launch is planned. It will be interesting to see if the same modus operandi will be used or if there will be a whole new plan regarding this event. All that remains to be seen is if the new video that will be released will gather more views than the first one. Interestingly, people should also check and compare the views difference between the original Tesla space launch and this parody. There might just be a surprise in store for those that will actually have the time to check this particular aspect.