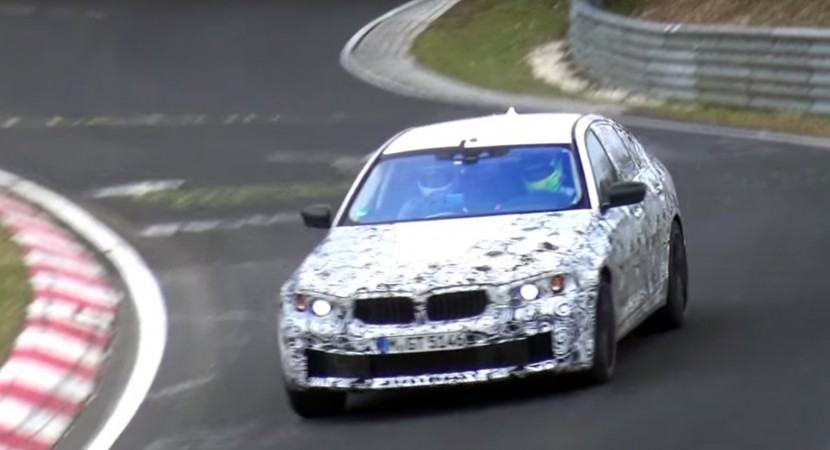 The next BMW M5 has been caught on Ring, tested to its limits. The main problem, looking at the clip is that it acts like a rear wheel drive.

…or like a four wheel drive with rear axle biased power transmission. Why is this a problem? Well, none of us would probably want an all-wheel drive M5. But, let’s face it: the current model, with its 560 hp needs a skilled driver to put the last drop of power to the ground safely and efficiently. With probably over 50 hp extra, the next generation will probably be even more wild, and instead of using more aggressively the electronic stability program, an all-wheel drive variant will certainly be a more efficient choice. And while its two main opponents use the AWD system at least as an option, BMW will probably consider it, since they own one of the most effective system on the market: the xDrive.

Giving the fact that it will be the first M5 after the 100th anniversary of BMW, we expect something special. Probably some CFRP body panels and the new CLAR platform, to save lots of weight. It will also probably use widely the ultra-high strength steel and the aluminum, because the F10’s 2 tonne weight is pretty much for a sports car. About the engine, we should probably expect an upgraded version of the current V8 twin-turbo, 4.4 liter engine, which will boost around 625 hp and over 720 Nm. Let’s wait and see what the future should bring us, keeping in mind that an over 600 hp, with a lower weight and an all-wheel drive system will transform the M5 into a well under four seconds four seater.