Hyundai is planning to enter the luxury market by introducing the all-new Genesis line-up, which will include six models by the end of the decade. Two of them, the G80 and the G90 are due for an official unveiling next month, in South Korea.

But until then, Hyundai has released a teaser image with the upcoming G90 luxury sedan, which showcases the car`s exquisite design and personality.

Speaking about design, Head of Hyundai Motor R&D Center stated that the “Genesis’ new large luxury sedan G90 will deliver a concept of ‘New Luxury’ to our customers. The G90 sits at the pinnacle of the Genesis brand.”

As we can depict from the two teaser images, the Hyundai G90 would come with an evolutionary design, marked by a massive radiator grille with stretched headlamps, long hood wearing the Genesis logo, as well as the boomerang-like rear lamp cluster which provides the model with an “athletic elegance”.

There is little to be known about the sedan`s powertrains and performance figures, but we should be able to find out more next month, when the model will be officially released and offered on the market by the end of 2015. 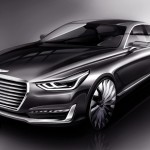 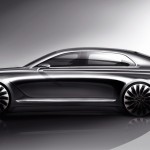