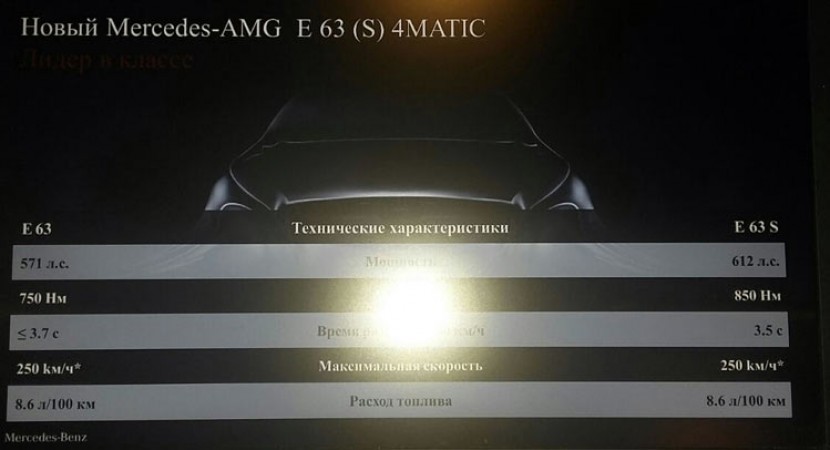 Rumors of a powerful 2017 Mercedes-AMG E63 have been circulating over the web for quite some time, but thanks to a leaked Russian photo, we now have the “confirmation” that the German beast will output somewhere around 612 horsepower.

The picture visualized above is also giving us some information concerning the performance figures. As we already know, the 2017 Mercedes-AMG E63 is using the AMG`s latest massive 4.0-liter twin-turbo V8 mill, with 563 horsepower and 750 Nm of torque in the entry-level.

With all these figures in mind, the AMG E63 S is capable of sprinting from 0 to 100 km/h in just 3.5 seconds, which is 0.7 seconds faster than the previous S version.

We are not sure what kind of transmission the AMG E63 will be using, but a report released on the Germancarforum mentions the long-rumored nine-speed automatic transmission, sending the power to the rear wheels. The “4MATIC” all-wheel drive will also be available. In terms of fuel consumption, the all-new hot model would come with an average of 8.6L per each 100 km.

The E63 lineup will be shortly completed by the Sedan, the Estate as well as the Coupe and Cabriolet versions. Meanwhile, feast your eyes on the leaked photo and make sure you leave your comments on how powerful the AMG E63 will be!