On the basis of Mercedes SL65 AMG Black Series, those of Carlsson will show us a supercar called C25 and when we say a supercar, just think of one. Mercedes SL65 AMG Black Series is an exclusive model, fast and fun on the track. But those of Carlsson think that on the model mentioned above, to make a faster model, more exclusive and designed for more fun on the track.

Currently we are presented only sketches, but as we see, the future prototype has a figure more closely worked with curved edges better defined and more radical, plus huge plugs and LEDs. At first glance it seems a rival made at the order for Aston Martin One-77. We must recognize that this project, if it will embody in the form of drawings, will attract many people in Geneva, where it will be presented.

The most spectacular feature that is announced is the power, C25 will offer 753 hp and 1150 Nm. Power plant will be the V12 twin-turbo engine of 6.0 liter. Encouraged by these specifications, those from Carlsson claim that the custom supercar can reach 100 km/h in 3.7 seconds and a top speed of 350 km/h. 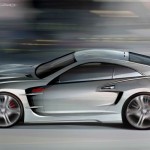 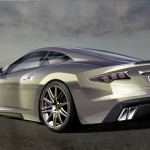 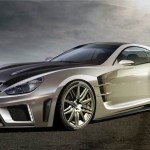