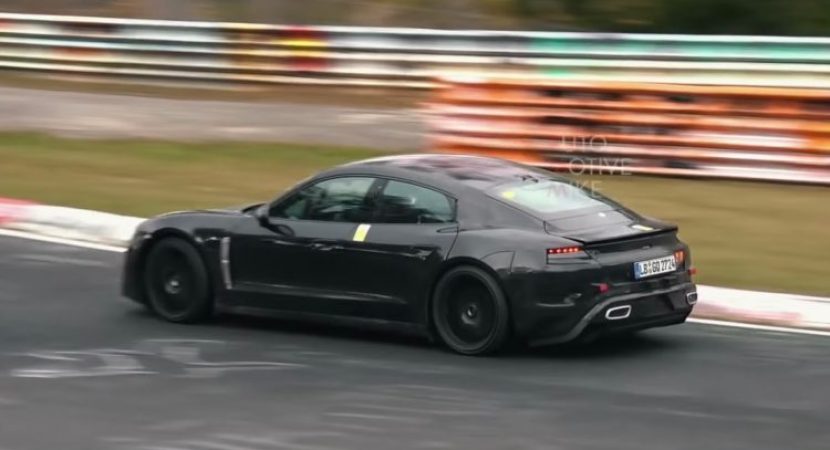 Already previewed in spy shots while performing tests on various regions in Germany, Porsche`s first fully-electric sports sedan, Tycan, has been seen in a recent spy video while tackling the difficult corners on the Ring.

With plenty of high-end manufacturers already preparing a new fleet of electric vehicles, it was just a matter of time until Porsche would answer back with an exceptional sedan with plenty of power and impressive aerodynamics. And extremely fast on the Ring, as we can depict from the video below released by journalists from Automotive magazine.

Loosing most of its camo around the body, the Porsche Taycan is seemingly performing final tests, just before getting ready for the official unveiling in 2019. And once released on the market, it will definitely be one of the most anticipated fully-electric cars in the world.

Visually, the Porsche Taycan will come with advanced aerodynamics, with fine details both at the front and rear ends. And even if those parts are still concealed, we already know how it will eventually look: extremely aggressive and evolutionary, carrying over the carmaker`s new design philosophy.

However, there is more than the design language, and that would be the drivetrain under the hood. According to recent reports, the new Porsche Taycan would feature a massive 800-volt electric system developing more than 440kW, being sent to two electric motors covering both axles. With that in mind, the new Taycan would be able to reach 100 km/h in a staggering 3.5 seconds, while the 0 to 200 km/h would be done in less than 12 seconds. And that means it`s faster than some supercars found on the market today.

And that`s not all. The Porsche Taycan will also come with a range of more than 500 km, and that with a fully charged battery. And this is something you don’t find on average electric vehicles today, which again, is impressive.

More than that, the same electric drive train might also equip other feature models from Porsche, like the new 718 Boxster or Cayman, with technology to be shared as well. In fact, the Taycan will lead the way for Porsche`s next generation of electric vehicles. Enjoy the spy video with the Porsche Taycan performing at its best on the famous Ring!