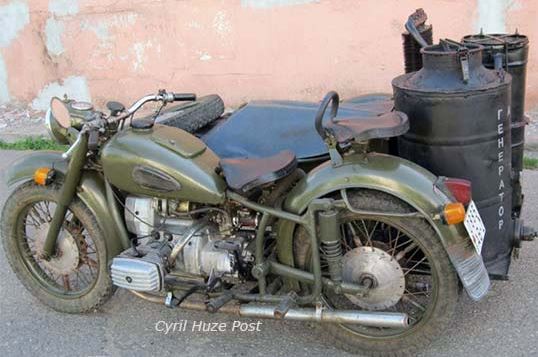 Nowadays, whenever we hear about alternative power, we instantly think of electricity or even hydrogen.

And while that is the general direction we should want to take, let’s not forget that not long ago, alternative power meant something else.

Used mostly around the time of the second World War, wood gas was one such alternative way of powering engines. Back then, the reason for it was fuel rationing, but now, only poor countries still use the system. The whole machinery that is used to produce the gas is quite big, and had to be fitted to the sidecar.


Inside, the process of gasification takes place, from which one obtains combustible hydrogen and carbon monoxide. And if you think about the hydrogen being a clean fuel, also remember that the monoxide pretty much cancels it out. In this configuration, the bike is reportedly able to reach 80 km/h (or 50 mph), although I wouldn’t want to go that fast on it.

Still, the build proves human ingenuity in face of adversity, and we should appreciate the man’s resolve in making it come true.
Photo credit Cyril Huze Post