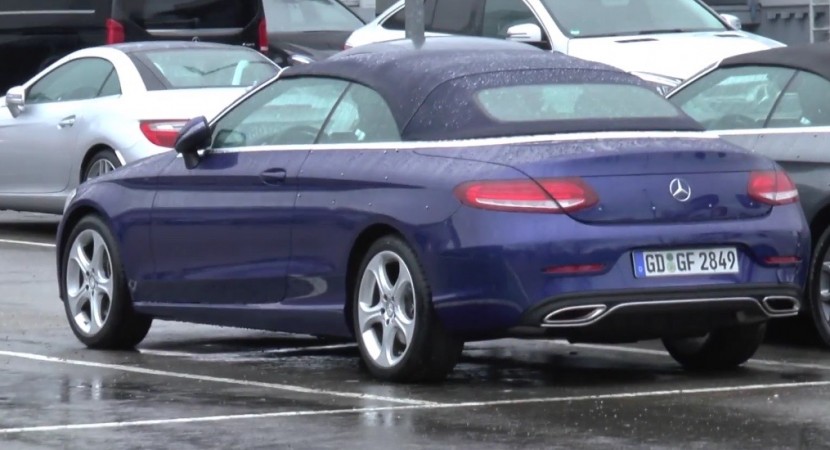 Following a series of teasers and spy photos, the 2016 Mercedes-Benz C-Class Cabrio is popping-up in our news again, this time the model being caught on a spy video, while performing last tests before heading to 2016 Geneva Motor Show for an official unveiling.

Compared to the previous cabrio models, the 2016 C-Class Cabrio seems to be bigger, longer and wider, as it stands on the company`s new MRA platform, also shared with the coupe sibling.

As we can depict from the spy video, the model is wearing a blue wrap with a black fabric, but other options will be available as well, like different color combinations on the exterior and fabric roof. Another test mule caught on shots was wearing for instance a red roof.

In terms of design, the C-Class Cabrio borrows some styling cues from the S-Class Cabrio, the model coming with flush-look taillights which perfectly complement the panels, sport diffuser section which supports the dual spread-apart exhausts and a few more.

Performance wise, the 2016 Mercedes-Benz C-Class Cabrio will sport the same engine lineup from the coupe version, the top of the line C 43 AMG packing a twin-turbo V6 engine. The powertrains are yet to be revealed at the 2016 Geneva Motor Show, starting 1st of March. Meanwhile, enjoy the spy video with the upcoming C-Class Cabrio!