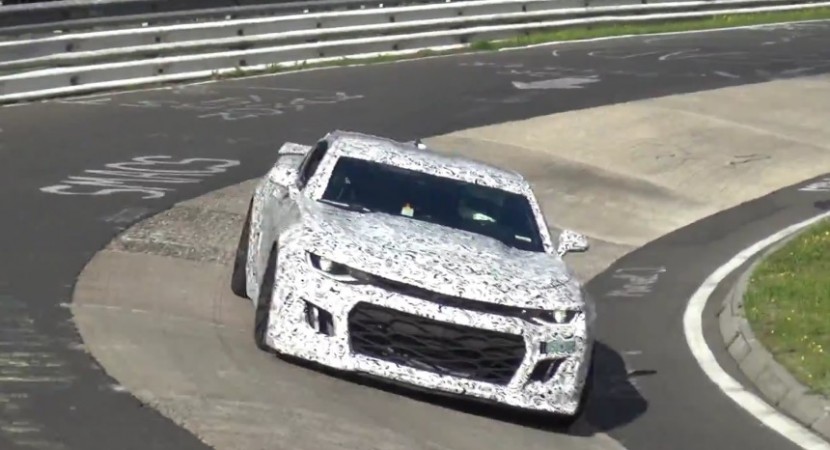 The all-new 2017 Chevrolet Camaro was recently unveiled, but it seems that GM doesn’t settle with just this model, the Group also being reportedly working on a high-performance Camaro. A prototype with the model, called the ZL1, was recently seen in a spy video, while being tested out on the Ring, in Germany, a fact that confirms the aforementioned rumors.

The 2017 Chevrolet Camaro ZL1 will come with a sportier and more aggressive body language, the track-version receiving a new front bumper with a wider intake center state, along with lower skirting and revised headlights.

The body features don’t stop here, as the new Camaro ZL1 will also get new side-skirts, rear deck with elevated wings, “double bubble” roof contour and a few more with that.

Another advantage that the ZL1 will have over the regular Camaro, is that the prototype will be with around 90 kg lighter, which will result in better performance figures. And speaking about performance, the 2017 Chevrolet Camaro ZL1 will feature an updated 6.2-liter supercharged V8 also packing the regular Camaro, and will develop around 580 horsepower.

With the new lighter chassis and upgraded engine, the new Camaro ZL1 will be able to run the quarter mile in a good 10 seconds, which is quite impressive than 11.07 seconds, in the regular Camaro.

More news will be available at the beginning of 2016, meanwhile, don’t forget to watch the spy video with the 2017 Chevrolet Camaro ZL1 running at full speed on the Ring!