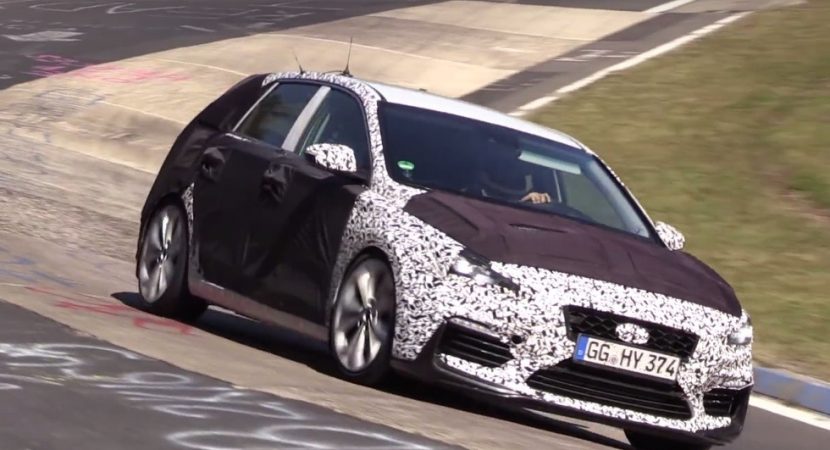 The South Korean based carmaker Hyundai has sent the all-new 2018 i30 N Performance model at the Ring for some new and what seems to be final tests, the test mule being also caught on a spy video showcasing less camouflage.

The 2018 Hyundai i30 N has been on tests from some time and now the model is wearing less camouflage which means that it is closer to its final production.

There are significant updates that would make the i30 N distinguish from its standard sibling, and one bit that is a real eye-catcher is the new front end with black horizontal vents it will come with. This will make it a little bit more aggressive.

There are also other body styling cues to take into account, such as more prominent air intake, revised LED headlamps, larger exhaust pipes, new taillights as well as alloy wheels all finished in blue.

Since we are dealing here with a hardcore version of the i30 standard version, the i30 N is also coming with updated mechanics, like custom suspension system, updated brakes as well as the optional 19-inch alloy wheels.

Performance wise, the 2018 Hyundai i30 N Performance will be using a 2.0-liter turbocharged flat-four engine, recently tested-out at the Nurburgring 24-hour event. The engine is rumored to be offered with a six-speed manual transmission. Unfortunately, the carmaker has not revealed the power or the performance figures.

We should expect fresh news with the 2018 Hyundai i30 N at a later date, meanwhile, enjoy the spy video with the model undergoing tests at the Ring!