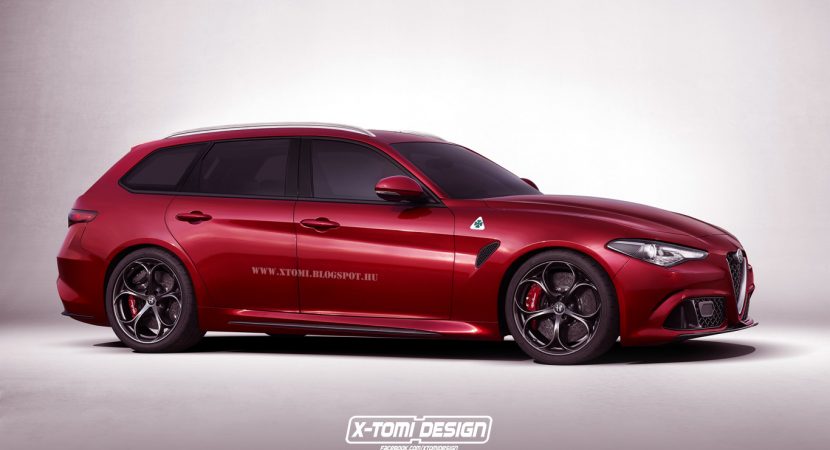 The Italian based carmaker Alfa Romeo has finally got what it really deserved after standing in the shadows for years: a fresh-new and high-performance Giulia lineup, with worthy versions and a top of the line QV, now much more potent than its direct competitor, the BMW M3.

Following the Giulia` huge success worldwide, the carmaker is also reportedly working on a wagon variant, which will offer more practicality and performance at the same time. And as expected, with render artists watching around the corners, it was just a matter of time until the first rendering with the aforementioned model would pop-up on the web.

Seen above in the first rendering, is X-Tomi Design`s envision of the future Alfa Romeo Giulia Wagon, the model borrowing the same styling bits from the standard model, yet coming with a wagon rear end, allowing increase cargo capacity and wider space inside.

The media have also hinted at the idea of a future Giulia wagon, with Felipe Munoz, analyst at JATO Dynamic market researches stating that the Italian carmaker has big chances of launching a wagon model.

This is what Munoz declared in a recent interview: “The Giulia sedan is doing reasonably well but without a wagon it is not competing in the largest portion of the midsize premium segment.”

His statement is also based on some inside sources that also state the carmaker`s planning of a wagon, giving the fact that only little modifications are required for the sedan to become a genuine family car.

“I think it’s the utilization across a wide range of applications within the group is probably the most beneficial thing we have done from a technical development in a long time,” Munoz also declared. We should expect the Alfa Romeo Giulia Wagon for an official debut right away, at the 2016 LA Auto Show, along the long-expected Stelvio SUV.