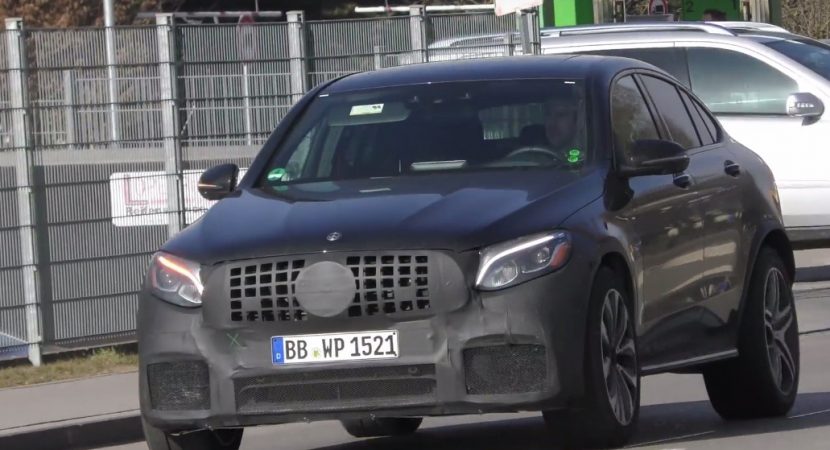 While Mercedes-Benz is preparing a host of models to officially display in Geneva in a couple of weeks, the AMG division is heavily testing some new models, one of them being the below GLC 63 Coupe.

The teaser video below highlighting the long-rumored Mercedes-AMG GLC 63 Coupe was launched online by walkoART YouTube user, and is showcasing the car`s body styling.

Taking a closer look at the camouflaged model cruising the public roads in Germany, everything looks big and bulk, starting with the massive and aggressive front end and finishing with the wide wheels, and quad exhaust outlets, all announcing a brute force of nature.

Speaking of force, the massive Mercedes-AMG GLC 63 Coupe is going to be equipped with a high-performance 4.0-liter AMG twin-turbo with a V8 configuration, which basically leaves its competitors in the dust (as a reminder, its direct competitors, the new Audi Q5 and BMW X3/X4 are not currently offered with a V8 engine).

The first V8-powered SUV is rumored to come with a whopping power of around 430 kW (576 horsepower), making thus the fastest SUV in its classes. According to close sources, we should expect around 4.0 seconds from 0 to 100 km/h, which is extremely impressive for an SUV.

We should expect the all-new Mercedes-AMG GLC 63 Coupe to arrive on the market as a 2018MY, with the first deliveries to start later on this year. Australia will have it locally at the beginning of 2018. Prices and full specifications will be announced in a couple of months.