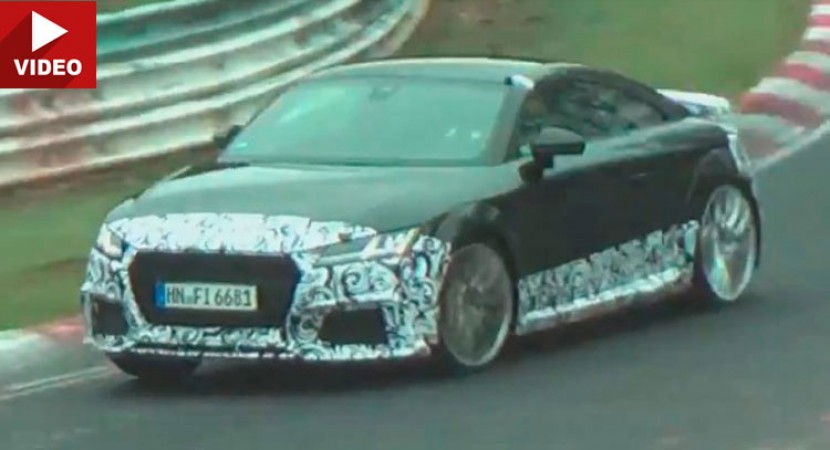 Audi is currently planning and preparing in total secrecy, apparently not, the latest versions of the current high-end Audi TT. We are dealing here with the upcoming Audi TT RS, both the Coupe and the Cabrio, recently caught on video while performing some rough tests on the Ring.

As we can depict from the spy video, both models are keeping the overall proportions of a genuine TT, but adding evolutionary and more aerodynamic design cues. The only difference between the two of them is the electrically operated top seen on the Cabrio, meaning some extra pounds over the Coupe.

There are little known about both versions at this moment concerning the exterior or interior, but from what we can see from the video, the models will come with some restyled body elements, like updated front and rear bumpers, elongated headlights and a new set of wider wheels, which will make them sportier.

Under the hood, the 2017 Audi TT RS Coupe and Cabrio will pack a 2.5-liter turbocharged five-cylinder engine, the same one used on the RS3, with a power output of 400 horsepower, which will differentiate it from the RS, with “just” 306 horsepower.

The power will be sent to the rear-biased variant with a quattro AWD system, via a six-speed manual or an optional dual-clutch automatic. This will allow a sprint from 0 to 100 km/h in around 4.0 seconds, which is best even than the hot BMW M2 Coupe or the Mercedes-AMG CLA 45.

Until further news, please enjoy the spy video with the 2017 Audi TT RS Coupe and Cabriolet!