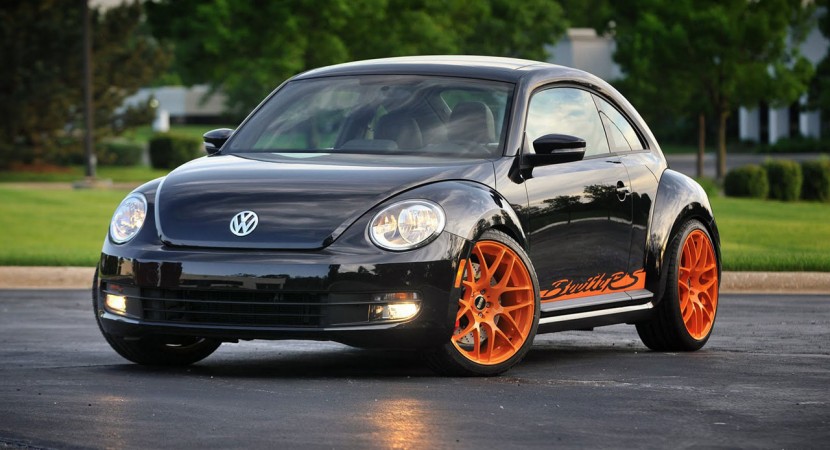 Interesting things happen when tuning companies get early access to new production models and the 2012 Volkswagen Beetle RS is definitely one of them.

VWVortex are the creators of this wheeled mongrel and I suppose they aimed it at the never-ending list of people who say the Porsche 911 is nothing more than a hotted up Volkswagen Beetle. With inspiration coming from what many consider to be the best 911 yet, the track focused 2011 GT3 RS.

Mind you, the only similarities at hand are to be found within the appearance because the cheap and trendy car that the modern Volkswagen Beetle is can’t hold a candle to its upclass brother in terms of performance.

Underneath the 2012 Volkswagen Beetle RS you’ll find the familiar powertrain technology of the 2.5 liter 5 cylinder and the 2.0 liter TSI turbocharged gasoline units with diesel duties covered by a 2.0 liter TDI Clean Diesel. That means that you can’t get any more than 200 horsepower and 207 lb-ft of torque which go towards the front wheels via a six speed manual gearbox or a fabulous dual-clutch DSG automatic.

After all, for the price the Germans are asking for the new 2012 Volkswagen Beetle you can’t demand that much more than you’re already getting.

VWVortex fitted the new Beetle with a set of VMR710 20 inch alloys. Technically speaking this big a difference in wheel sizes forced the tuners to add an offset of 35 in order to maintain functionality. The new wheels are covered in equally impressive Continental ExtremeContact DW 245-35ZR20 tires. Helping the additions stay on without too much stress on the chassis, VWVortex added a full H&R suspension setup.

Since they redid most of the stuff that’s connected to the wheels, VWVortex also gave the 2012 Volkswagen Beetle RS a new set of brakes as well.

They come from Brembo and they are labeled as a Stage II brake kit. The new brakes are made up of 14″ front two-piece cross drilled rotors, four-piston radial mount calipers, aluminum mounting brackets and stainless braided lines and pads.

In keeping with the tradition of the Beetle looking up to better brothers for technology, we’re told that the new suspension they fitted on the 2012 Volkswagen Beetle with what is standard for the 2011 VW Golf GTI Mark VI. All of this seemingly hardcore components basically do very little to help the driver enjoy it more, but the true point of the RS version of the 2012 VW Beetle was to help image.

This is where the orange wheels, orange sticker that’s a lot like on the 911 GT3 RS and the rear spoiler of the same nature.