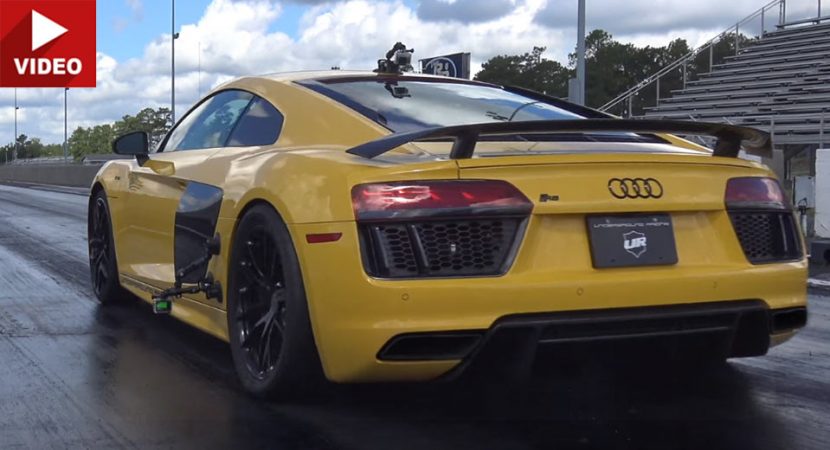 There are a few models from Audi that can stand against a Bugatti Chiron or a Koenigsegg One:1 and that particular model is the almighty R8 V10 Plus, the one Audi that can be properly customized to deliver a whopping power.

This gorgeous 2017 Audi R8 V10 Plus was officially unveiled at the 2015 Geneva Motor Show and comes with advanced aerodynamics which makes it extremely fast down the tracks.

The video below is showcasing what an R8 V10 Plus can do in just a quarter mile, and that`s because it comes fully packed with a gigantic engine which delivers enormous power. It is almost like seeing the Bugatti Chiron unleashing its own sheer power.

We are dealing here with a customized 5.2-liter twin-turbo V10 engine, the same one found on the Lamborghini Huracan, capable of delivering a staggering 1,250 horsepower, allowing thus a sprint from 0 to 100 km/h in just 3.2 seconds. The topping is electronically set at 330 km/h.

The entire stage power kit was put together by the technicians from Underground Racing tuner and involves their Stage 3 kit, consisting of an ECU remapping. It can be used with a 93 octane pump gas, meaning 1,100 horsepower or the MS109 high-octane race gas, squeezing the aforementioned 1,250 horsepower.

Now, the result of this staggering Stage 3 kit is observed in the video below, the 2017 Audi R8 V10 Plus managing to run the whole quarter mile in just 9.0 seconds. And if that`s not impressive, I don’t know what it is!

If you had such an extremely powerful model, would you go for some extra juice to make it as powerful as this particular one seen here?