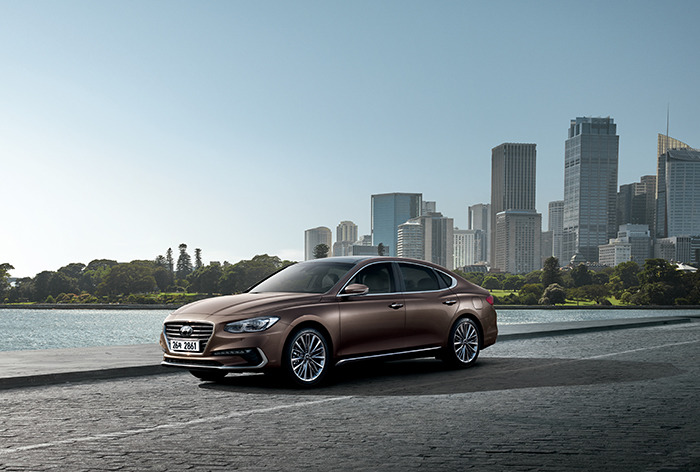 The mid-size segment received a new competitor about a month ago when Hyundai launched the all-new 2017 Azera / Grandeur on the market, the carmaker also revealing the first images with an improved design.

Called the Grandeur in Korea and Azera on other limited markets, the new model comes with some improved styling bits that make it interesting at least in terms of design, and the new photo gallery released by the carmaker may confirm the stating.

As we can depict from the photos, Hyundai dropped down the rugged and the traditional styling lines and adopted a more evolutionary design, which makes it more premium and high-class. We are looking here at a completely different front fascia with new daytime running lights, updated taillights, angular creases, chrome tailpipes, all complemented with new wheels.

The exterior is not the only one getting a fresh feel, the cabin also receiving improved materials and a host of new high-tech gizmos. The most important ones refer to the new 7.0-inch display with Apple CarPlay and Android Auto with wireless charging, panoramic sunroof and so on, adding as well the now common safety features – Lane Keeping Assist, Active Blind Spot Detection, Advanced Smart Cruise Control, Driver Attention Alert or Around View Monitor.

In the engine department, the 2017 Hyundai Azera / Grandeur is offered with four engines, at least in Korea – the model will not be available in Europe, North America and Australia – namely a 2.0-liter petrol and a much more potent 3.0-liter. Also, the carmaker will introduce a 3.0-liter petrol V6, called the “3.0 LPi”, with technical specifications to be released at a later date. The diesel refers to a 2.2-liter four-cylinder.

Mercedes-AMG GT R Gets Shot Down in Berlin