The China-based Foton Motor Borgward is back with some fresh details concerning its latest model, the BX7 SUV. Previously considered to be based on the new Buick SUV, the Borgward BX7 SUV is coming with some German-like features, adding the large front grille, the company`s huge logo, muscular hips, or the Borgward lettering found on the rear hatch.

From a technical point of view, the seven-seater Borgward BX7 SUV is big, measuring 4.7 mm long and coming with a 1,344-liter storage space. Other features inside refer to the massive 12.3-inch infotainment system, with Wi-Fi hotspot, smartphone connection, or a 360-degree camera.

In the engine department, the Borgward BX7 SUV will pack an interesting lineup, consisting of four-cylinder gasoline burners and diesels. Thus, we might expect a 2.0-liter four-cylinder turbocharged gasoline, with 224 horsepower, hooked to a dual-clutch seven-speed transmission, sending the power to all wheels via an electronically-controlled multi-plate clutch from BorgWarner.

Also, a plug-in hybrid version will be also launched, packing the same 2.0-liter turbo unit, with 410 horsepower and a mile range of 55 km.

The Borgward BX7 SUV will be officially unveiled at the 2015 Frankfurt Motor Show and will first hit the Chinese market, followed by Germany, where the model is said to come with a price of 26,000 euros. 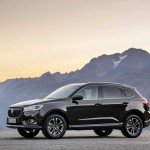 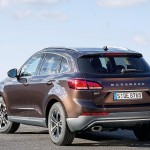 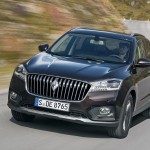