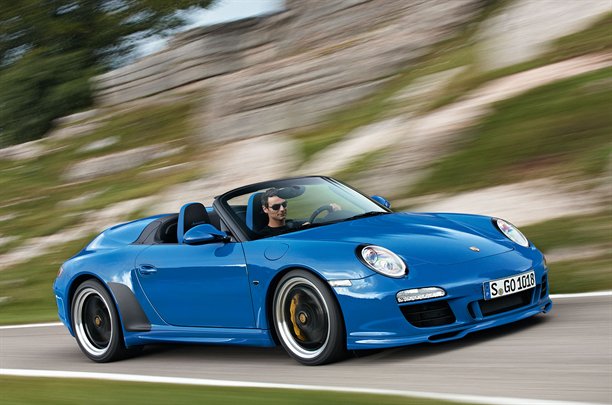 The Paris Auto Show will be the witness of revealing the all-new Porsche 911 Speedster. The Germans at Porsche announced a limited edition of 911 Speedster celebrating the Porsche 356 Speedster launched back in 1953. After announcing the fastest 911 Carrera, namely the GTS version for the same French Auto Show, the Germans revealed the 911 Speedster and sets its debut for Paris.

We said limited edition because the Stuttgart manufacturer showed its intetion to produce just 356 911 Speedster units with a price of over 200.000 euro each. Under the bonnet, the German will put the 3.8-liter propeller able to deliver 408 horsepower and 420 Nm of torque. Ceramic brakes come as standard together with the seven-speed double-clutch PDK gearbox.


At the exterior the model received few touches such as the rear spoiler, air intakes for the rear part and an extension for the front bumper. The Germans revealed in the same time a video introducing better to us the 2011 Porsche 911 Speedster.
http://www.youtube.com/watch?v=KiMVuBGF6tU