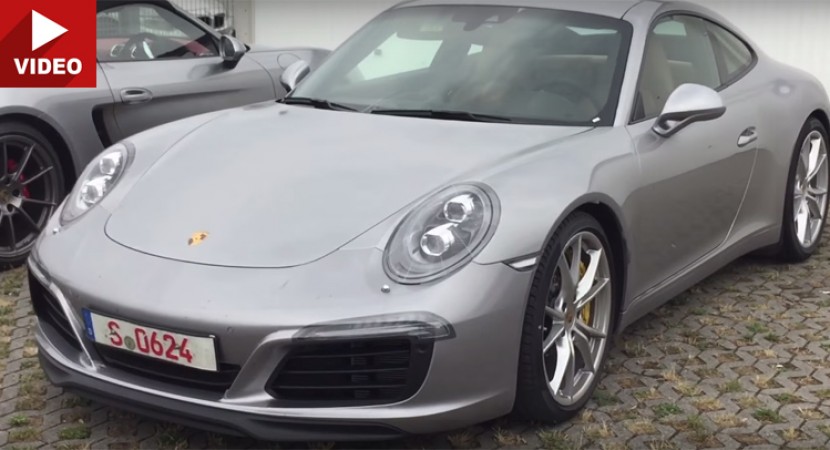 The arrival of the new 2016 Porsche 911 Carrera S has been long foreseen through some past videos and spy shots and now the model is almost ready to face an official debut, reportedly at the 2015 Frankfurt Motor Show, this September. The real proof is given by the most recent spy video which is showcasing the model in full details, both outside and inside, while sitting in a car park in Hockenheimring, in Germany.

The person shooting this video has tried to preview the model upclose, revealing the exterior details that the new 2016 Porsche 911 Carrera S will be coming with, starting with the LED daytime running lights, new taillights, revised rear bumper with central-mounted pipes and finishing with the inside, where the facelift Carrera S will come with a much wider touchscreen, new switchgear found on the center console and a few more.

Apart the slight body changes, after all we are dealing with a facelift version of the present 911, the 2016 911 Carrera S will bring some important changes under the hood as well, the model being rumored to drop the current engines in favor of some turbocharged flat-six ones.

Thus, we might see a 2.7-liter engine with 365 horsepower and 450 Nm of torque in the base Carrera, as well as the 3.0-liter engine in the Carrera S, with 414 horsepower and 510 Nm of torque. But the performance figures are kept hidden for the moment, with more info to be unveiled next month, in Frankfurt. Meanwhile, enjoy the video with the 2016 Porsche 911 Carrera S and don’t forget to share your opinions with us!