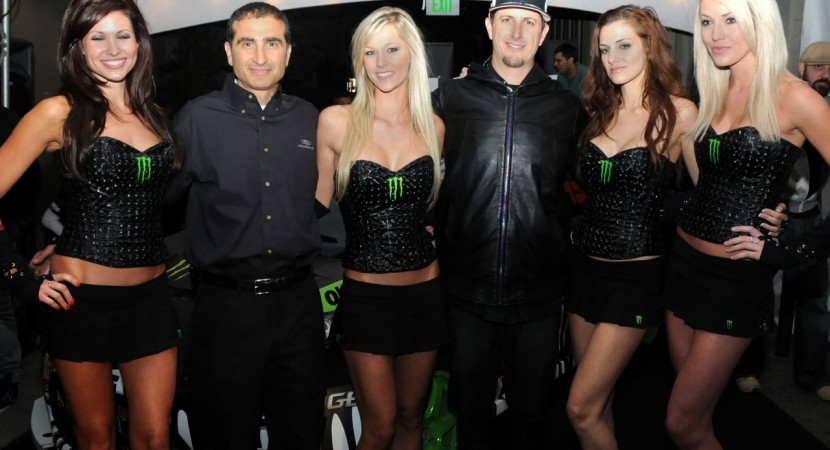 We were teased yesterday and today it’s here, Ken Block has revealed his new ride for the Gymkhana series that has boosted his popularity. Gymkhana THREE Ford Fiesta (some where in the back of shot)

The new car is based on a 2011 Ford Fiesta and his Gymkhana series is an Internet phenomenon racking up more than 30 million views combined.

The new car is dubbed the Gymkhana THREE 2011 Ford Fiesta and features some very impressive stats, it weighs in at 2,425 lbs and develops 650 horsepower and 660 lb-ft of torque that can get it from 0 to 60 mph in just 2 seconds. The car is allegedly capable of more power, hovering round the 850 horsepower mark but it will be used in this “tuned down” form in order to achieve a greater balance of power and control.

Some other custom touches to this beast of a car come in the form of a hydraulic e-brake handle being made of a custom-made metal piece that boasts Ken’s Huck Gee skull logo and No. 43 engraved into it. Ken Block‘s No. 43 trademark is also displayed in the side rear windows.

The exterior features a paint job that is similar to the Monster World Rally Team Rally America Fiesta that Ken Block drives but features some more dripping accents done to it. The looks aren’t very impressive but the stats definitely are so Olsbergs Motorsport Evolution can be proud of their achievement.