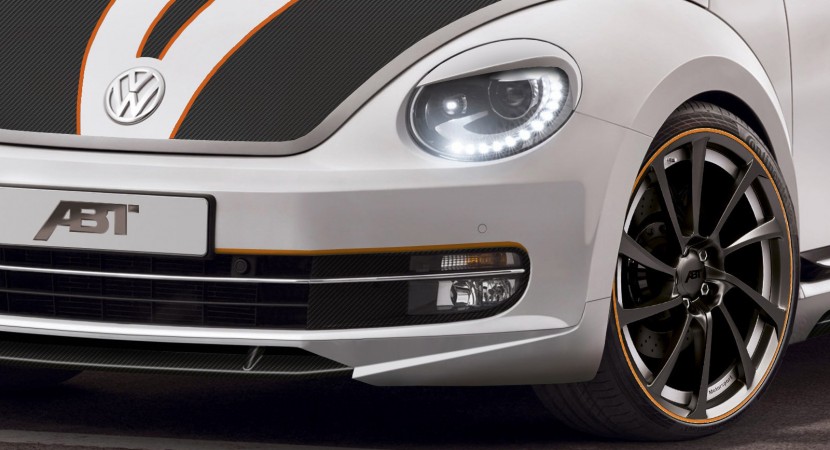 Tuning companies of sufficient pedigree, the likes of ABT Sportsline, have gotten to a point where they preview new releases ahead of the motor shows at which they will be unveiling them.

In this case, ABT Sportsline is giving us a little (although quite detailed) taster of what’s to come at their stand at this fall’s Frankfurt Motor Show. It is the first serious tune up the 2012 VW Beetle gets and it is called the Speedle.

As funky and such as the 2012 Volkswagen Speedle may sound, let’s not forget that ABT Sportsline is a German tuning company and therefore everything about its work is very serious.

The details they’ve been offering us are more than sufficient for an early preview like this. Nothing is available on the interior accommodations and there’s very little on any changes that have to do with handling but everything else seems to be sorted. A new exterior was made available courtesy of an aero kit that includes a front spoiler, a rear apron incorporating a diffuser, a sizable rear wing and a set of new side skirts.

ABT Sportline’s 2012 VW Speedle also has tuner-like covers for the headlamps and tail lights, different sets of tail pipes, a special paint job and the whole range of carbon fiber bits one might expect to see on this sort of car.

The German tuner didn’t say too much about the rubber that’s around on the 19 inch wheels or the brakes underneath but let’s say the engine specs make up for it. ABT Sportsline will have a tune-up ready for every powerplant version Volkswagen places under the bonnet of the 2012 Beetle.

In other words, each of the engines gets from 35 to 50 extra horses available.

Diesel fans have not been forgotten, with the 1.6 TDI now pumping out 125 horsepower and the 2.0 TDI developing 170 horsepower. That’s up from 105 and 150 respectively so the proportional gains are relatively similar to what the petrol powered counterparts offer and now for the oil burners.

All the missing bits and details of the 2012 Volkswagen Beetle / Speedle will be filled in by ABT Sportsline back in September when Frankfurt becomes host to the motor show.