Home
Porsche
Video: How about a Porsche Cayman with a V8 Rear Mid-Engine from Ford Mustang? 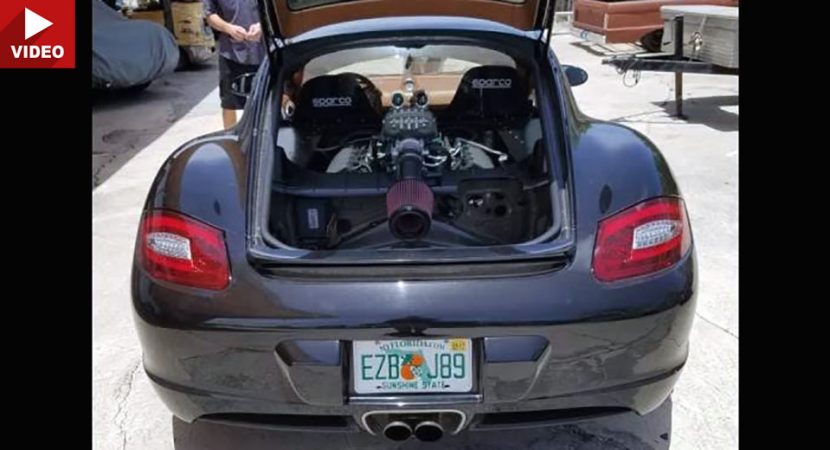 It is absolutely amazing what people can do with their cars when they have enough money to buy an exclusive island in the Emirates. And what better example of tweaking your sports car with an engine borrowed from an American muscle car!

Well, it seems that the owner of this Porsche Cayman who got tired of the “old” engine of his Porsche Cayman model and decided to add some new horses by fitting it with the massive V8 engine from Ford Mustang. And as we can depict from the picture, the only way of fitting it was to install it in the mid-section of the rear, giving its massive proportion.

The entire installation was carried out by the technicians from Power By The Hour Performance, who ditched the Cayman`s engine and swapped it with the Mustang`s massive 5.0-liter Coyote V8, built and created by the very one Ford Mustang.

As aforementioned, because of its massive proportion, the car`s new engine is no longer hidden, and everybody can admire its sheer size and power. The air intake also extends in the truck. Otherwise, the new mill doesn’t change any of the space available for the driver and right passenger.

With the new engine installed, this Porsche Cayman can now scream a total of 428 horsepower and 364 lb-ft of torque. The sprint from 0 to 100 km/h is not given, but with the engine`s weight, I reckon somewhere between 4.3-4.4 seconds. As for the transmission, it is hard to know what fine-tunes and adjustments have been carried out, but it surely wasn’t easy to do that.