The year’s most important motoring event in Britain, the Goodwood Festival of Speed that takes place from 2 to 4 July is where Porsche is planning on giving petrolheads a proper treat. The German sportscar manufacturer has announced that they will be showcasing some historic racing cars at the event, to be precise, historic winners are the main course.

Porsche representatives said that the company from Stuttgart will be bringing some of the victorious sports cars from the Targa Florio road race in Sicily, as well as the Porsche 917 to celebrate the 40th anniversary of the 1970 win at Le Mans.

Also on a celebratory note, attendants of the event will have a chance to see the rare Porsche 804 Grand Prix car from 1962 since it will be showcased at the event as part of commemorations of 60 years of the F1 World Championship.

Adding to the list of cars the Germans will be bringing over you should be able to spot some of Porsche’s latest models such as the new Cayenne and what they’re calling the most powerful and fastest ever production car, the 620 horsepower 911 GT2 RS that will compete in the “Sunday Times Supercar Run”. Wasn’t the Carrera GT a production car? 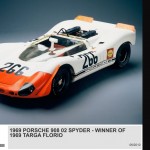